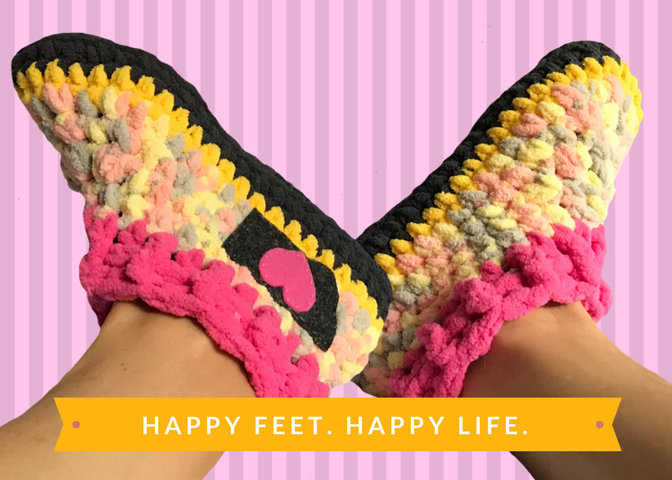 The BEST THING about Pahhhs slippers, and reason I started making them in the first place, is because they are so comfortable! That is reason number one. Adding all of the colors and appliqués was secondary, and was just a fun way to make people happy. The chenille is so soft and soothing to your skin. It’s CUSHY! And the cool thing is they keep your feet toasty, but the large stitching makes them breathable, so they’re not too hot. And unlike other slipper socks, they are not tight and binding on your toes or ankles.

For me, these slippers were a lifesaver. A few years ago, after pretty routine bunion surgery, I developed something called CRPS — Complex Regional Pain Syndrome. Most of you have never heard of it. I hadn’t until I got it. I’ll get into it in more detail in another post, but in a nutshell …

CRPS is, they think, an autoimmune disorder that affects the nerves and circulatory system, most often in the extremities (hands, feet). It usually develops after an injury or surgery. When people ask me what it feels like I usually say it’s like the worst case of frostbite — when your feet are so frozen that they feel like they’re on fire. And then there’s the nerves zapping and zinging, like lightning bolts shooting out of your toes. CRPS is the highest ranked pain on the McGill Pain Index. The highest. Luckily my doctors diagnosed it very quickly, and it’s WAY better than the first year after surgery. Back then, as other people describe it, it felt like my foot was dipped in boiling oil and lit on fire. Every day, all day.

In that first year I couldn’t bear to even have my feet under the covers of my bed. It hurt just to have air blow on them. Shoes were unbearable. Slippers were out of the question. And I’ve always been a slipper gal. I live in the mountains. It’s cold here, even in the summer, at night.

So, being a crafty gal, I started on a mission to make some slippers that I could wear without making my feet hurt more than they did. And after a couple years of trial and error, knitting and crocheting, different yarns and methods, I stumbled across a pattern (link coming) that was the answer for me. Super soft, bulky yarn with loose stitching that wasn’t tight on my foot and was breathable. So I made them for myself and loved them! It’s really amazing what a difference they’ve made in my life. I know, they’re just slippers. But they actually made my feet not only NOT hurt so much, but they felt better! To have ANY relief, even if just for a few hours, was heaven.

I’ve had lots of people with foot problems tell me the same thing. Now I’m not saying they are going to cure anything, and I know they might not be helpful for everyone, but they might be worth a try!

Category: Features
About the Slipper Maker